How to Feel Good About Work

The true story of one senior business leader who had lost his balance.

A key foundation of wellbeing, and an ongoing struggle for all of us, is the need for balance in our lives.

As well as keeping work in perspective, though, we should make sure that our work gives us satisfaction and enjoyment, at least a lot of the time.

I recall being struck that the Stephenson Farmer “Thriving at Work” review included, in its numerous pages, insights and recommendations the phrase, “working should make people feel good”.

It’s a simple yet profound point, but one that many of us, despite all our intelligence and sophistication, too easily forget.

That was certainly true of one client I worked with not so long ago (names and identifying details have been changed).

Trevone is the CEO of a big hedge fund. He has always been a forceful, charismatic leader and driven himself and his employees hard.

A few months before he came to see me, he had made an appearance in the financial news pages that shocked the City, and those who knew him well.

It was announced that he had taken three months off work due to ‘stress’. As well as being under medical care, the Chairman of the Board wanted him to have a coach to help him transition back to work as he recovered.

I had expected him to be resistant to my appearance in his life, but it was quite the opposite. He had been even more shocked himself at what had happened and was happy to get the help he needed.

As we spoke, though, I began to get the first glimmer of a concern that was to grow stronger as the weeks wore on. For Trevone, it was about getting better so he could go back to how things were. A real change wasn’t on his mind.

First, though, I had to get behind the label of ‘stress’. It turned out that Trevone had been suffering from exhaustion, some panic attacks and a bit of low-level clinical depression.

It further transpired that he’d actually been suffering like this for several years and it was only at the insistence of his wife that he’d sought help, at which point the company’s insurance advisers had insisted he take time off and get properly treated.

The Wheel of Life

Trevone’s problem was more high profile then most, and more pronounced, but it was all too common in a milder form. When faced with stress or overwork I like to try and get a picture of the coachee as a whole, using a tool called the Wheel of Life. You can easily apply it to yourself.

Draw a circle. Then fill it in, like a pie chart, with four aspects of your life – work, self, family and social, and spirituality – each one proportionately taking up the space it occupies in a typical month. 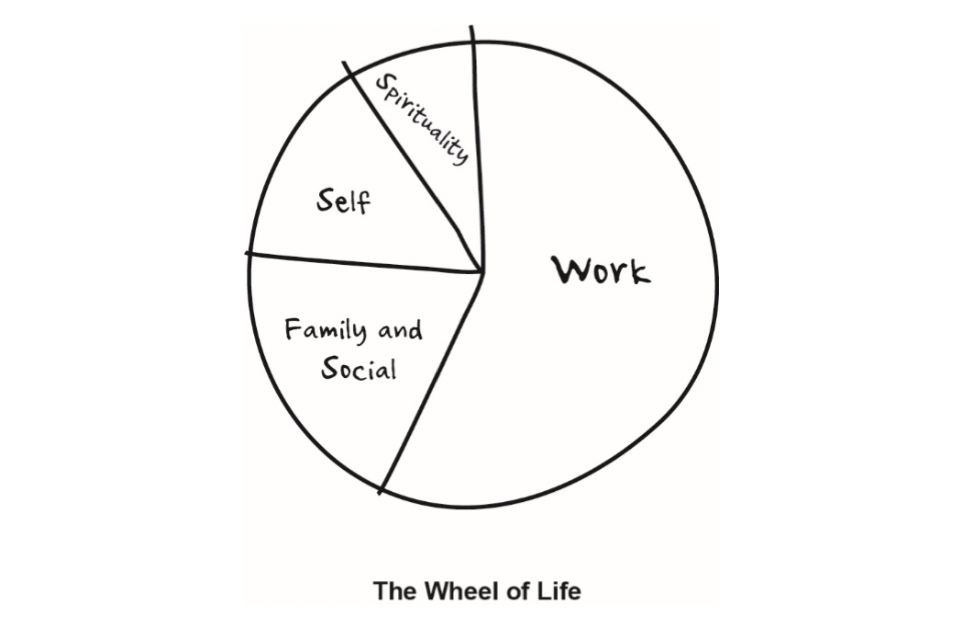 It is amazing how much the modern executive’s life is consumed by work; family and social life almost always come next, with self and spirituality a distant joint third. In fact, some people I have this conversation with barely know what I mean by each.

Trevone was typical. Work was around 80 per cent, his family 15 per cent, he barely saw his friends, other than the occasional golf game (which we agreed could go under ‘self’), and he had no spiritual aspect to his life at all.

If it seems relevant, I will sometimes ask my coachees to have a full health checkup too. Even if they are given the medical all clear the doctor will almost always recommend some changes in lifestyle.

A great read on this subject is ‘The Making of the Corporate Athlete’ by Jim Loehr and Tony Schwartz, which draws a parallel between athletes and executives, pointing out that we only expect athletes to perform at their peak rarely. For the rest of the time they will have long periods of rest and training (what might be called fallow periods).

Contrast that with senior executives who are expected to perform at their peak for long hours day in and day out, with only an occasional holiday, laptop in tow.

Creating his wheel of life did shock Trevone a little. We moved to the next stage and I asked him to sketch out what he wanted the wheel to look like. It was very different, work had gone down to 60 per cent; family up to 20 per cent, with friends adding an extra 10 per cent to that, with 10 per cent left over for something a bit transcendental.

He was talking about taking up mountaineering again, which he’d enjoyed in his twenties, but also confessed to wondering about going back to church. He’d been brought up a Roman Catholic and, to my surprise, told me he’d once considered going into the priesthood.

The week after we’d discussed all this, Trevone was clearly disgruntled as we began our session. ‘I’ve been thinking about last week,’ he began. ‘It’s all very well me saying I want to cut my work down from 80 per cent to 60 per cent, but how am I going to do that? We’ve got the merger, new regulation and Brexit to navigate.’

Hearing these words, my heart sank. Just like lots of leaders I work with – but more profoundly I felt – Trevone seemed to be a leader who assumed that, in the end, he had to do everything himself. Even when, as in his case, he had hundreds of people working for him, some of them paid, literally, millions.

What was really going on?

When I raised this, Trevone seemed to get it, but I felt there was something blocking him. I got an inkling of what that might be as we sketched out what a new style of leadership might look like.

In “The Psychopathology of Everyday Life” Sigmund Freud wrote about how jokes can give away our true, unconscious feelings. On one occasion Trevone muttered about how what we were talking about sounded like semi- retirement.

I asked what he meant. ‘Well, it sounds like an easy life, doesn’t it?’ I tried to probe this but he brushed it off. I tried another way, asking him to draw the images that came to mind when he thought of going back to work full-time. He stepped up to the white- board and drew an old factory, then a treadwheel, then a storm – all black clouds and zig-zags of lightning.

Sometimes my coaching questions seem to come straight from the heart (or the gut), and I found myself asking him, ‘Do you enjoy work?’

He looked at me, and harrumphed. ‘That’s a stupid question.’

‘What’s the answer?’ I persisted.

He slowly capped the dry marker and sat down. ‘I’ve never really thought about it.’

We then spoke for an hour about the fact that he’d never really enjoyed work. We went all through his employment history and I got him to sketch out on a whiteboard a simple graph – his “lifeline” showing his work success and work happiness levels over time. While his success line was very consistently high and ever rising, his happiness line was close to zero and pretty flat.

We had discovered Trevone’s pathogenic core belief (an underlying belief or assumption about the world that we carry with us through life, often subconsciously): work was supposed to feel (excuse the language but I am repeating his authentic words) like shit.

It wasn’t really clear where, in Trevone’s upbringing or early life, this notion had taken hold or why. That mattered less than his attitude to it today. As soon as he’d articulated it, he saw how absurd it was and expressed a desire to change.

As we worked on this, we saw how this central, if hidden, motif had influenced his hard-driving management style (everyone else should be as miserable as he was) and even his health (why not look and feel like shit as well).

Oprah Winfrey has a fantastically simple but profound saying that she uses when someone is talking about how awful their husband or wife is to them. ‘Honey,’ she will drawl, reaching out to place a comforting hand on their shoulder or knee, ‘love ain’t supposed to feel bad.’

This isn’t quite true of work. Good, fulfilling, challenging work will feel hard sometimes, but not all the time. Often, most of the time even, it should feel good. Once Trevone realised all this, it affected him on a deep level.

We pulled out the glimmers of happiness that had flickered on his “lifeline” graph and we brainstormed how he could reinforce and expand these; we explored his sense of purpose and we worked on the idea of him building in time during his working week for praise (of others and himself) and celebration.

Slowly but surely over the next year Trevone began to fundamentally change who he was as a leader and how he related to work. A few months after the coaching had finished, I bumped into him at a City Awards dinner. He ran over, looking fitter than I’d ever seen him. After we had chatted for a bit he sighed and said he had to get back to his table, motioning over to a group of middle-aged guys in suits, all looking a bit worse for wear.

He leaned in to whisper something: “Some bits of work are still shit, eh?” before bouncing back to his seat, slapping people on the back as he did so.

Adapted from chapter 11: Space to Balance of Derek Draper’s book “Create Space: How to Manage Time and Find focus, Productivity and Success”. Derek Draper is the CEO of CDP Leadership Consultants which offer well-being masterclasses, workshops and coaching, and give a well-being reading whenever people use our Potential Profiler www.DEEPQ.me. Find out more at www.cdp.consulting/wellbeing.

<< GET THE MAD WORLD NEWSLETTER >>

The Real Value of Wellbeing

A CEO guide to unlocking wellness as an asset class

1. Mental health is the leading cause of sickness absence in the UK, costing an average of £1,035 per employee per year:
https://www.time-to-change.org.uk/get-involved/get-your-workplace-involved/employer-pledge

2. Organisations promoting wellbeing are three and a half times more likely to be creative and innovative:
https://www.bupa.co.uk/~/media/Images/Business/bupa-for-business-hub-may-17/wellbeing-edit/Bupa-Wellbeing-Edit-2017-FINAL.pdf

3. FTSE companies that prioritise employee engagement and wellbeing outperform the rest of the FTSE 100 by 10%:
https://wellbeing.bitc.org.uk/sites/default/files/final_ftse_100_workwell_public_reporting_benchmarking_report_0_0.pdf

4. Replacing an employee costs on average 21% of their pay:
https://hbr.org/2017/03/why-do-employees-stay-a-clear-career-path-and-good-pay-for-starters

5. 53% of millennials say a healthy work-life balance would make them stay at their job:
https://blog.accessperks.com/millennial-employee-engagement-loyalty-statistics-the-ultimate-collection

6. The Thriving at Work report puts the annual cost to the UK economy of poor mental health at up to £99bn, of which about £42bn is borne by employers:
https://blog.accessperks.com/millennial-employee-engagement-loyalty-statistics-the-ultimate-collection

8. Anxiety and depression among workers in the UK has bit a record high, rising by nearly a third in the last four years:
http://www.independent.co.uk/news/uk/home-news/depression-uk-stats-figures-anxiety-record-high-a7991056.html